The avoidance of controversy has been a guiding principle for articles on this website, but a recent vacation to New England ‒ Nantucket Island specifically ‒ has unleashed my emotional conflicts on the contentious subject of men wearing red trousers. Or, in my case, not wearing them.

Our host on Cape Cod, who is certainly no lobster-legs himself, was bemused that my wife was determined to drag me into Murray’s Toggery Shop on the island to pick up some Nantucket Reds. We were, after all, on holiday, and why not get in the spirit of things?

While I am no dandy, our host knows me to be an Englishman with great respect for the orthodoxy of menswear. His chuckle seemed to say: “Will he? Won’t he?”

Here’s the point: the reasons for not wearing red trousers in America are different from those in the United Kingdom.

It is well known that the fishermen of Brittany in northern France used tannins from tree bark to dye their sails as a protection against rot. The color of the dyed sails was a rich red (brique in French), a color that gradually faded to a pale rose after years of exposure to saltwater and sun. Leftover pieces of sail canvas were stitched together to make clothing, including working trousers.

While the trousers easily made their way across the English Channel, the tanbark sails and clothing also crossed the Atlantic Ocean on the trade winds as early as the mid-19th century. The cloth was used widely along Cape Cod and the Outer Islands as a durable material for clothing in working-class occupations.

The charming red trousers were co-opted in the mid-20th century by well-to-do New Englanders vacationing on the Cape and Outer Islands. The combination of working-class origins and rarity outside the region was the perfect recipe for the coded, insider understatement of privilege and special knowledge that used to be called cachet. It was as if a few really rich people were nonchalantly wearing blue jeans when nobody else could find a pair.

As the reds faded with years of yachting activity and washing, the status of the wearer increased. The paler, the richer.

While the Breton red canvas trousers were certainly considered working clothes in England, they were not defined as strictly working-class clothes. Because posh people work, too.

My introduction to red trousers came at my first English boarding school, as did so many other experiences. All the masters (i.e. teachers) wore them. They were all World War II veterans. Canvas red trousers were considered appropriate off-duty wear for servicemen, especially officers. Style, or even cachet, were not of consideration. These were clothes you could wear seven days a week without showing too much wear or stains. They lasted for years. Never mind that they eventually started to fade. No one noticed or cared.

The masters at my school were almost all ex-army. Two brothers were joint-headmasters: John and Peter G. Whately-Smith (known as Billy and Piggy) taught history and Latin, respectively. Colonel Manders (“Domo”) taught English studies; Major Lindsay (“Gaffer”), sciences; Tony Branford, MBE, 3rd Hussars (“Branny”), French; and Guy Lewman, the only airman and non-commissioned officer (“Crow”) had us for maths and divinity. They all wore red trousers in various grades of decomposition.

The notable exception among the masters was Miss Barbara Trinder (“Miss Tra”), who taught history and French. She was equally terrifying, loveable and out of central casting for St. Trinian’s. She was too young to make the cut for the war. And her preference was for mini-skirts, and she never shaved her legs ‒ to great Jacobian effect. It was generally agreed that, had Miss Tra been of age to enter active service in World War II, it would have ended earlier. But that’s another story.

With the Nantucket Reds becoming the unofficial uniform for members of the New York Yacht Club (to be worn with blue or white shirts and a blue blazer), it wasn’t long before word got out. And soon Murray’s Toggery Shop at 62 Main Street on Nantucket was happy to meet the demand. 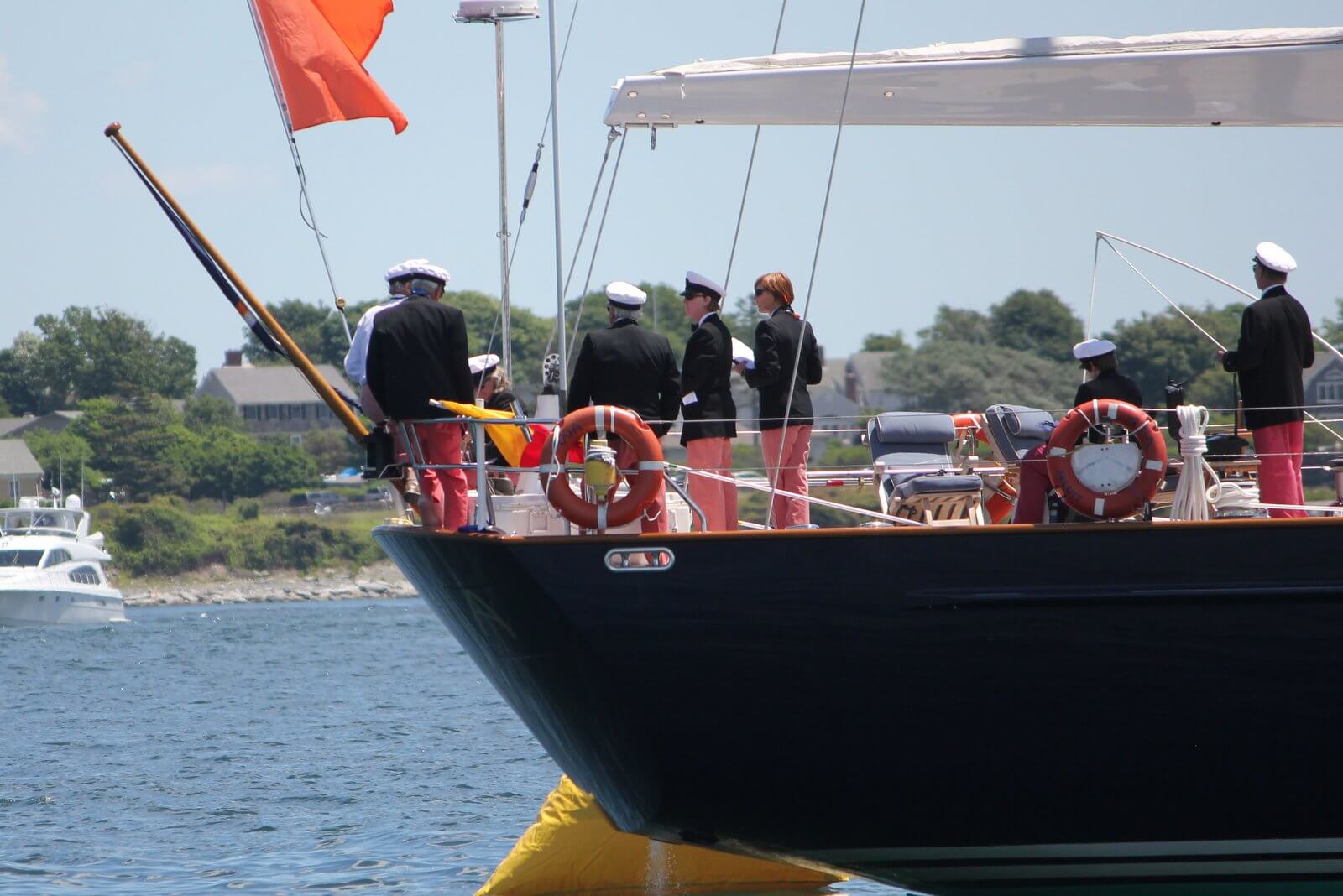 From the 1960s through the 1970s the red trousers grew to become the ubiquitous casual uniform for Preps across the northeast US seaboard.

Then, in 1980, The Official Preppy Handbook was published. While the book intended to gently mock WASP-hood in America, the general public was having none of the irony and plunged into red trousers with little restraint.

The crescendo came early in the second decade of this century after budget and luxury fashion brands were cranking out red pants from anywhere they could make them. Even Murray’s Toggery Shop started outsourcing in a hush-hush kind of way. Manufacturers were also happy to prewash the trousers for the masses who did not have the patience or sufficient culture to wait for the passage of time to fade the color.

It was all about class – and messaging.

Then, all of a sudden, the raucous mass-market phase of the red trouser craze was over. Was it because J. Crew introduced cerulean blue trousers? In any case, the mob turned in a different direction.

From casual clothes for off-duty and ex-military, the red trousers were taken up by landed gentry types, also known as country toffs. The fabrics used broadened to corduroy, chinos and even moleskin.

From there, the trend spread in the early 2000s to the mass market. Inevitably, there was an aspirational aspect to the fashion of wearing red trousers, but not to the extent that was seen in America. In England, twits of all classes were wearing them. But the cut, the material, the color and the combination of other clothes, and the shoes worn were crucial to the signaling provided. After all, upper-middle class twits had been finding ways to distinguish themselves from nouveaux twits for over a century, and red trousers were as good a means as any. 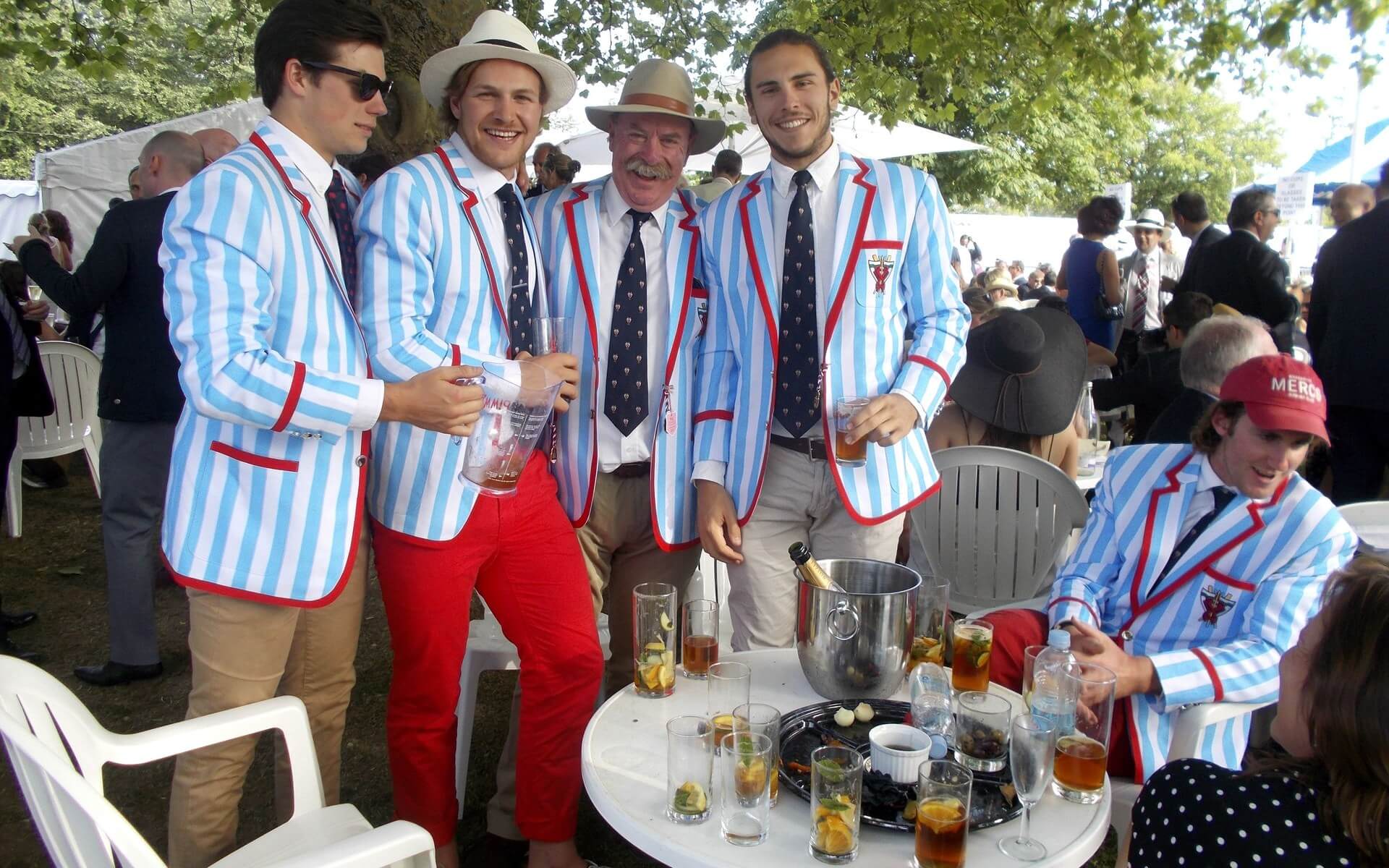 And it was the same website, motivated both by enthusiasm and disdain for the wearing of red trousers ‒ in a way that is incomparably English ‒ that led the way to the snobbery/inverse snobbery vortex that eventually collapsed on itself like the formation of a stellar black hole.

A UK government poll conducted in mid-July of that year revealed that 46 percent of the population did not approve of men who wore red trousers, and among UKIP members (those who would go on to vote for Brexit three years later) 53 percent disapproved of them. It was official.

Even if you are not a member of the yachting establishment on the US East Coast or a third-generation Prep, and you find yourself on Nantucket, feel free to stroll into Murray’s Toggery Shop and pick up a pair of Original Nantucket Reds. Just be aware of the subtext.

Conversely, in England, unless you are a country toff, ex-military or want to dress like your old school master, even five years after the great meltdown red trousers are still radioactive.

Alternatively, for just 74 Euros (plus shipping) you could own a pair of pantalon des marins pêcheurs Bretons en coton brique from Le Glazik. But be warned, these actually look like something a commercial fisherman would wear. Slip them on and get yourself invited to a yacht club social on the Cape. You’ll get funny looks from the bluebloods, who will be muttering that they “never saw anything like that on the shelves at Murray’s.”

But you will be smug in the secret knowledge that you are wearing the real, real thing. And, after all, isn’t that what so much of it is about?