It is often observed that one shouldn’t expect much to happen in River Oaks residential real estate in the week or two leading up to the traditional Tax Day on April 15. It’s not that, in a normal year, many taxpayers in the top tier file their taxes by then, anyway. It’s just the idea of taxes that supposedly puts the kibosh on the animal spirits.

Tax Day 2021 is May 17, and yet in the first two weeks of April there were no newly pending contracts in River Oaks, at any price. Zero.

Perplexingly, showing activity in the first half of April continued at the same furious pace we saw in March. (It has eased off a bit since mid-April.)

Was this the ghostly effect of Tax Days’ past psyching the market into a sulk? Or was something more serious afoot? Some of us are still haunted by April 2020, when COVID shut the market down. Should we expect a market sea-change later in the first half of 2021?

As we scratched our heads looking at the lack of traction, with the other hand reaching for the phone to call around to colleagues to poll them on the inactivity for their listings, all of a sudden the market roared back to life.

In just a dozen days between mid-April and the time of this writing, there have been nine new contracts, almost exclusively in the mid- and upper-tiers of the market. If all of April had been that busy it would have counted as the most active month on record. 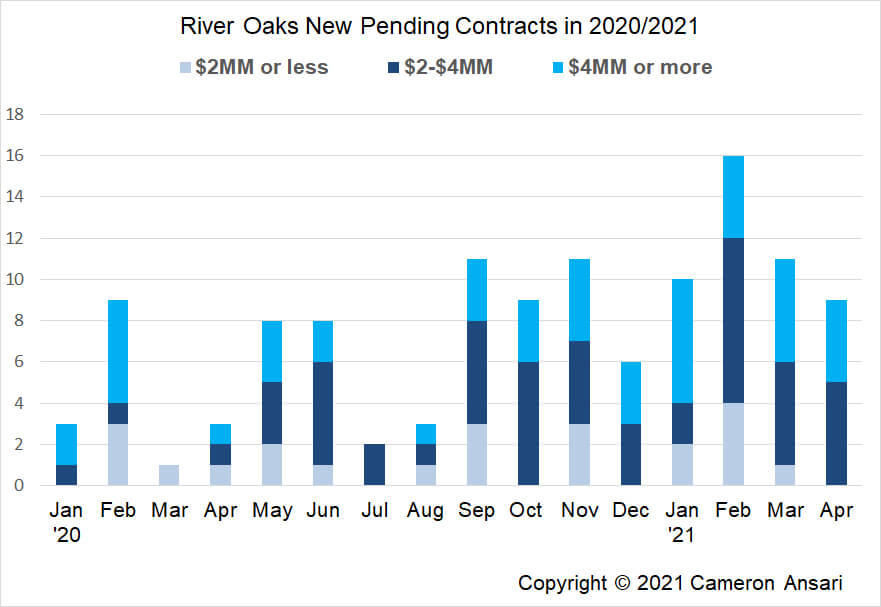 Closed sales in April (the pale green bar on the graph below) are estimated at seven houses. (Lot sales are not included in these numbers.) That’s a significant step-down from March’s extraordinarily large number of closed sales, but on a par for what is normal for April. Not that we’re sure what normal is supposed to be anymore. 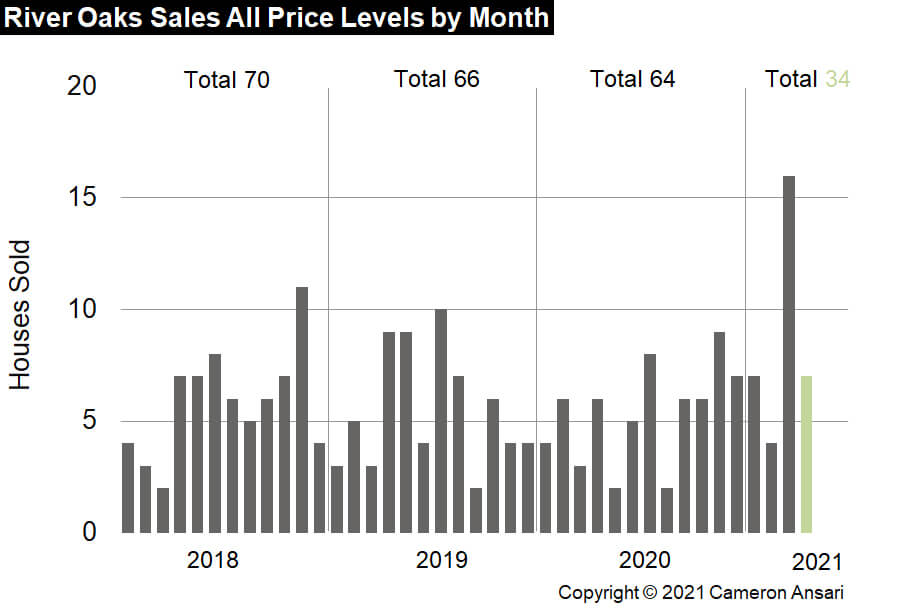 And while we never know what surprises are around the corner for the market, we can say that, in River Oaks, at a third of the way into 2021 we are at the halfway point of any recent year in terms of sales numbers. Given the preponderance of sales contracts being in the higher prices ranges, it is quite possible that 2021 could turn out to be a record-breaking year in terms of dollar sales volume.

The pause we saw in the first 14 days of April 2021, in retrospect, looks like the market simply taking a breather. Maybe that’s what happens every year in April, and we just blame it on taxes.