When it comes to gauging market activity in real estate, measuring the number of months of available inventory* can provide intriguing insight beyond the usual statistics.

Let’s start by agreeing that fewer months of available inventory = relatively more active sales. In other words, less is better. 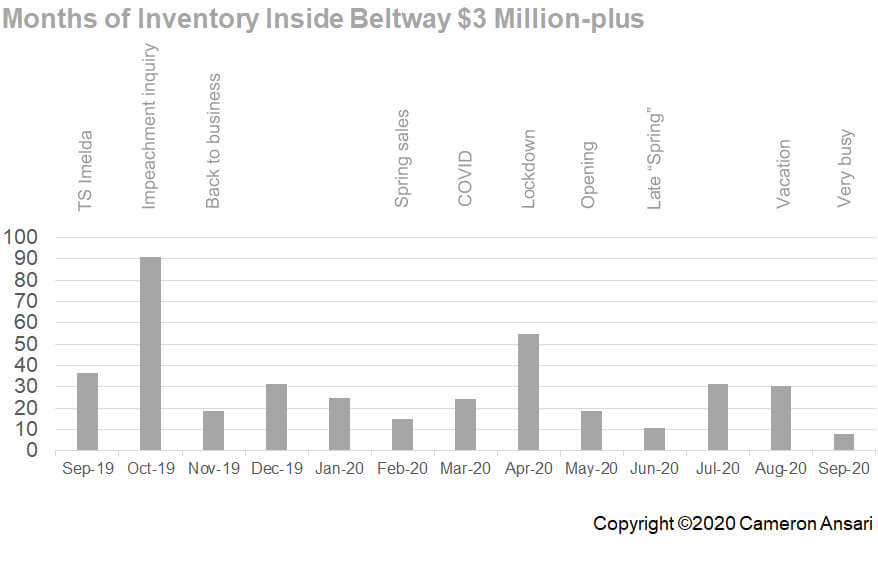 For the sake of this discussion, we are using the $3 million-plus market as the yardstick for people who are making elective decisions when it comes to real estate – that is, people buying property because they chose to as opposed to have to.

Ever since the extraordinary shutdown of market activity beginning in September 2019, and lasting for eight perplexing weeks last year, we have tracked this market indicator closely. With all the drama since then, we thought our readers would like a tour through the past 12 months from the perspective of market absorption. It sounds boring, but it will be worthwhile reading on.

September 2019 provided a weak start to the local Fall real estate season, beginning slowly and then coming to a stop thanks to Tropical Storm Imelda. There were palpable echoes of Hurricane Harvey.

October did not even get out of the starting blocks thanks to the beginning of impeachment hearings. It was fascinating to observe sellers and agents assuming it was just their property sitting unsold. In fact, the entire market had simply shut down.

In November, buyers shrugged their shoulders and got back to business.

There was a fairly typical Yuletide slowdown in December.

January was slow to get started, though we should note that in River Oaks – the neighborhood we are most focused on in our business – January was extremely active.

February was looking like a classic busy start to the Spring selling season.

Then came March, and whoops! There was no second half to March for real estate, as COVID-19 brought the market to an abrupt halt.

April was the month of lockdown in Houston. There was much uncertainty about the future. Sellers did not want buyers in their homes. Buyers did not want to walk around strange homes. Yet, surprisingly enough, few existing transactions failed to consummate.

The second half of May saw brisk sales as a result of pent-up demand after the lockdown was relaxed.

July was brisk until mid-month. It was as if the market was exhausted by mid-July and decided to go away to cooler places.

The summer exeat continued throughout August.

If this chart shows anything remarkable, it’s how different one September can be from another. The momentum of sales by mid-September 2020 as we write this is tremendous.

But let’s remember that last Fall’s real estate season evaporated in the second half of September with TS Imelda, followed by political drama in Washington.

And it is intriguing to note that, in terms of sales momentum for high-end real estate, market jitters due to politics can have a more significant impact than natural disasters. At least in the short term.

We will be watching and analyzing the data closely in the remaining months of 2020.

*How do we calculate months of available inventory (and its inverse, market absorption)? Using MLS data from HAR.com, for market areas that include Memorial, Tanglewood/Galleria/Briargrove, River Oaks/Greenway/Memorial Park, West U/Southampton/Museum, we tabulate the number of available residential properties priced at $3 million or higher for each month and divide the total by the number of newly formed pending sales contracts in that month. The resulting calculation theoretically provides the number of months it would take to sell all existing inventory at the current rate of sales. It is useful as a short-term indicator of the pace of the market.

For more long-term and in-depth analysis of the real estate market in River Oaks, please subscribe to our twice-yearly River Oaks Market Report.