Regular readers will be relieved to know that this month’s River Oaks market update will have more pictures and fewer words than usual. And yet, looking at the graphics alone would convey a more dire message than is truly the case. There’s more to the story. Read on.

Let’s face it, showing activity in this market sector of $2 million-plus has been dismal. It’s even worse now than in our recent 1st Quarter Update, when at least the West U area was still chugging along. The drop-off of buyers looking at property in central Houston has been consistent with the national picture.

What is striking, however, is that while showing appointments have declined spectacularly in our market there are still some people looking at houses. And remarkably few appointment requests have been declined.

Withdrawals from the Market

For properties priced higher than $2 million in the central Houston market – this includes River Oaks, West U area, Tanglewood and Memorial – the level of withdrawals from the market since the beginning of March 2020 is staggering compared with the same period in 2019.­­ Sixty-two properties have been withdrawn because of the Covid-19 pandemic as of Wednesday, April 15. That’s more than 15% of the market.

In River Oaks just 10% of listings have been withdrawn. It appears that River Oaks sellers are more aware that few viewing requests are likely to be made during the pandemic, but it remains important to be seen as actively on the market.

And note: We are not counting in this number the numerous speculative new construction offerings that, even in more normal times, play hide and seek on MLS by withdrawing and re-listing. We are not sure who they are fooling. 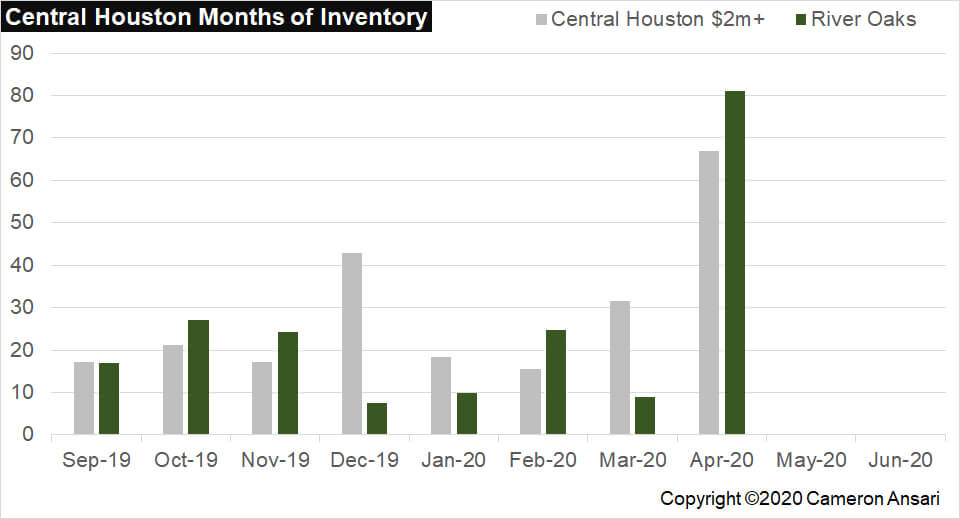 Almost 70 months of inventory in the middle of the spring selling season is not normal. 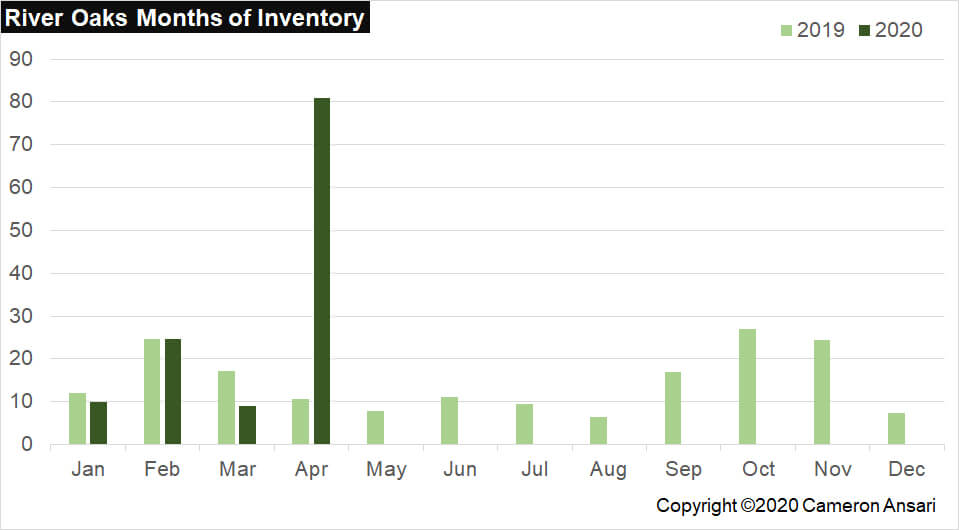 ­­The numbers in River Oaks alone are even more drastic, as compared here with 2019. That’s what happens when inventory was just starting to crank up for the spring selling season. Only one property has gone into contract in River Oaks since the start of March through mid-April. 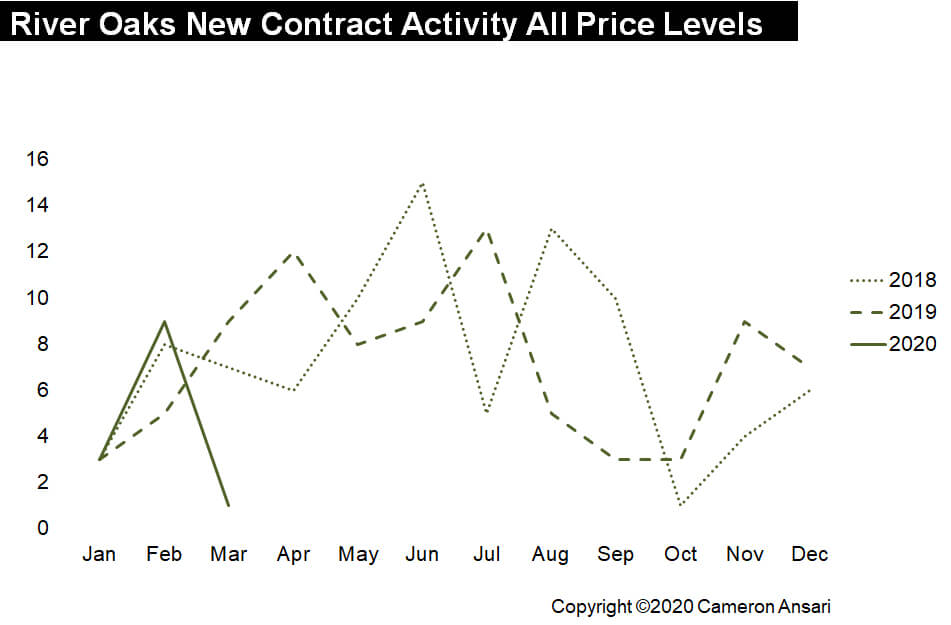 What these graphs do not show is that since Covid-19 cast its shadow on our market there have only been two price reductions in River Oaks. Even in normal times we would expect multiple price reductions across every price range of the market as sellers proactively flush out buyers.

That’s the point. The $2 million-plus market has frozen: Most sellers remain on the market; showings are minimal; prices are not budging.

In River Oaks, sellers are mostly able to weather periods of economic decline. Often, even sellers with financial difficulty are able to hang on for up to a couple of years.

The exceptions to that rule are the speculative builders who are inevitably motivated by a different time schedule. Granted, the pressure may be temporarily off them, as lenders are relaxing their credit deadlines. But it can’t last for long.

We currently count 30 speculative projects with something on the ground in River Oaks that remain unsold. That figure excludes new houses that were recently leased because they hadn’t sold. 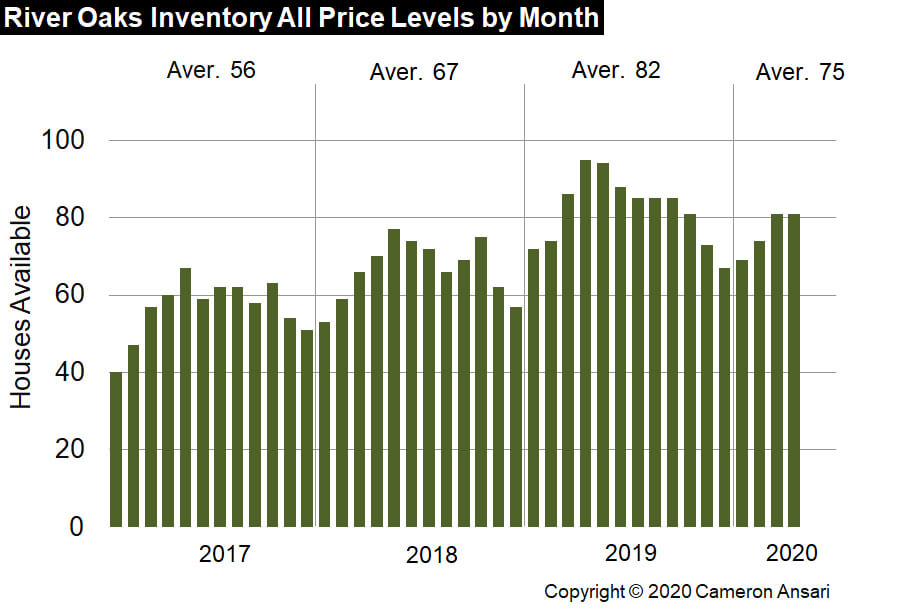 To confirm our assumptions about the market being on hold, here’s a snapshot of inventory conditions in River Oaks.

In past years the number of houses for sale steadily climbs month-by-month until the arrival of summer, providing the feedstock for sales. This year inventory stopped growing in mid-March. 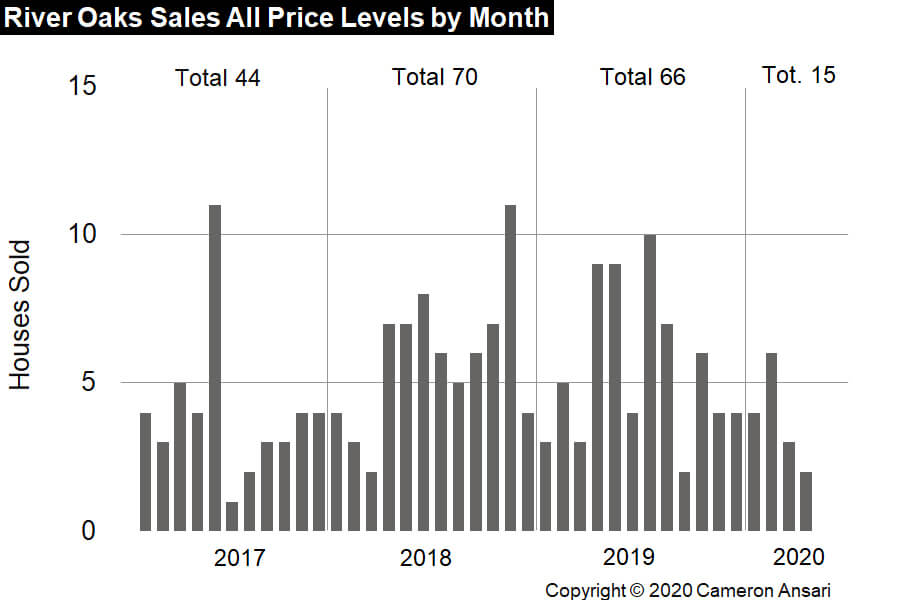 Sales have stopped, too. Interestingly, 2020 started off with a roar and, by mid-April, closed sales were ahead of any recent year.

Unfortunately, with only three more sales set to close in April, the second quarter of 2020 is going to be a poor one.

The mid-1980s notwithstanding, River Oaks tends to hold its value through periods of economic decline. The business of selling real estate simply dries up, but real prices rarely decline. (That is not the same as saying that overpriced properties never have to come down to reality.) But every time we go through a difficult period, we say that this time is different.

We are maintaining a positive attitude about the market, on the basis of past experience and the knowledge that property owners in River Oaks are a resilient and resourceful lot.

Doomsayers will point to a sale earlier this month of a large house on half an acre on a superb block of Del Monte, which closed for $3,850,000. The seller paid almost twice as much for it three years ago. Distress? We disagree. It was overpriced three years ago.

But we take encouragement from the knowledge that there are many people in River Oaks who are financially robust enough to take that kind of loss when it’s time to move on.