If you examine the charts showing available inventory and overall sales of houses in River Oaks, you will note that the years 2015 and 2014 look remarkably similar. 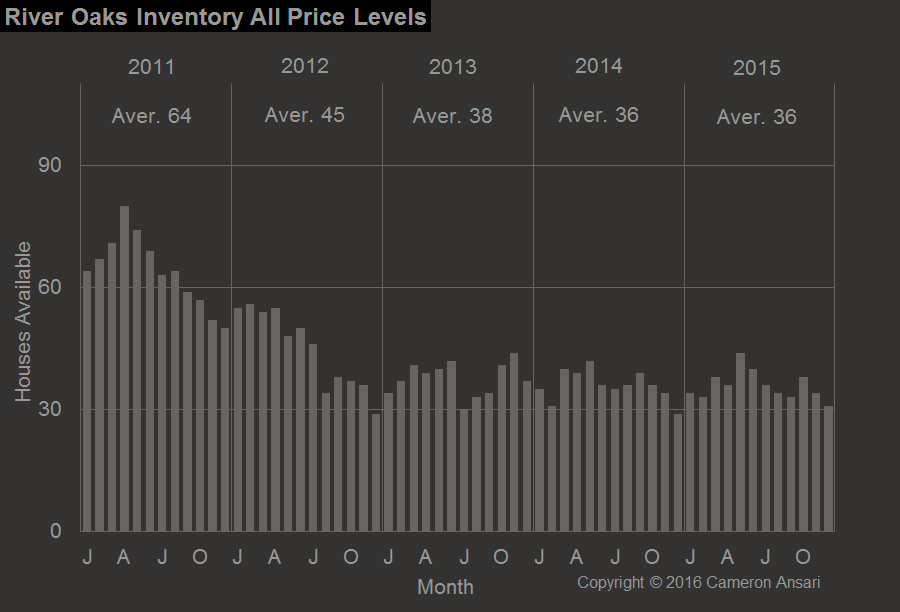 Even when we break down the inventory into three distinct price ranges, as we do in our full River Oaks Market Report – the first edition of 2016 is set for publication the last week in January – there was little change when comparing the last two years. The exception is a slight dip of inventory at the high end, thanks to a spike in sales activity at the end of 2015 (see “Why Hasn’t That House Sold?” in our December ROH Letter).

And yet, for those of us on the front line, the experience of 2014 and 2015 was very different. In 2014 our real estate market felt like it would be calm blue skies forever, while 2015 was affected by new, broader economic events, most notably the fall in the price of oil.

Let’s be clear though: In neither of the past two years has the River Oaks market been characterized by the buying frenzy seen in some other Houston markets, despite common perception. There were a couple of times in the first half of 2015 in which buyer anxiety in neighboring markets spilled over into River Oaks, resulting in purchases in the under-$2 million range that look hasty in retrospect.

Additionally, there were a number of lot sales at extraordinarily high prices (mostly a hangover from 2014), many of which were speculative purchases at numbers that simply do not add up.

However, for the most part, transactions have only been consummated after due deliberation, which is healthy for any market any time.

As we have already told our clients, the Houston economy changed in January 2015, our real estate market changed in June, and in September people finally started chatting about what it all means. And as is so often the case, much of what they have been saying is not entirely accurate.

For an in-depth analysis of the 2015 River Oaks real estate market at mid-year, click here. Stay tuned for the next edition of the River Oaks Market Report, available January 31.